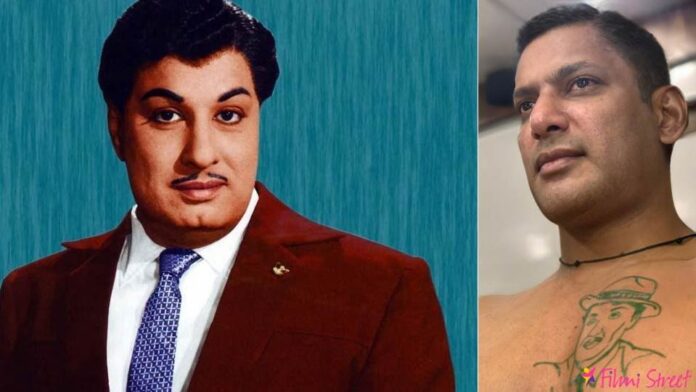 Actor Vishal has MGR’s image tattooed on his chest. He is an ardent fan and follower of the former Chief Minister of Tamil Nadu. The picture is now out on the internet.

MG Ramachandran is known by many names as Ponmanach Semmal, the revolutionary leader. MGR, who attracted the people of Tamil Nadu while he was an actor, afterward became the Chief Minister of Tamil Nadu with the support of the people.

As long as he was there, he oversaw the government. Even though it has been 35 years since his disappearance, he still holds a place in people’s minds.

Actor Vishal made his debut in Tamil with the movie Chellame. Thereafter, he became a leading star by acting in the hit films Chandakozhi, Thimiru, Thamirapharani and Iruuthiri.

After Lathi, Vishal is further acting in Mark Antony, directed by Advik Ravichandran. SJ Surya, Sunil are playing the other important roles in this film. This film is too being made as a pan-Indian film.