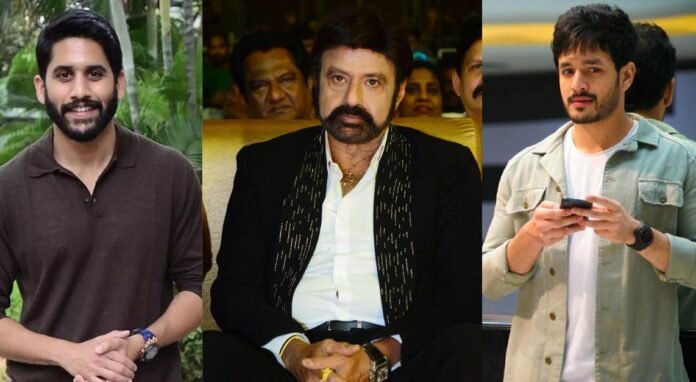 Akkineni family heroes have given counter to Nandamuri Balakrishnas distasteful remarks about their grandfather and actor Late Akkineni Nageswar Rao. Nandamuri Balakrishna has been the reason for a new controversy while speaking at the success event of his latest film, Veera Simha Reddy.

While trying to bring fun in his speech to entertain his fans at the ceremony, he mentioned Akkineni Nageswara Rao’s name in aa wrong way. “We used to talk a lot about shastras, my father, dialogues, aa Rangarao ee Rangarao, Akkineni, Thokkineni, etc.,” he said at the event.

Balakrishna’s comments have not gone down well with the fans of legendary actor Akkineni Nageswara Rao. Also his fans and other nuetral fans too condemned his words. ANR was NT Rama Rao’s contemporary in Telugu cinema, and they were further close friends. ANR and NTR have also shared screen space in several movies.

They also showed their bonding in the NTR biopic, which was directed by Balakrishna. Besides producing it, he had also essayed the role of his father in the two-part biopic NTR: Kathanayakudu and NTR: Mahanayakudu.

Naga Chaitanya, the grandson of ANR, reacted to Balakrishna’s comment. On Tuesday, he released a statement expressing his displeasure. “Nandamuri Taraka Rama Rao garu, Akkineni Nageswara Rao garu and SV Ranga Rao garu’s creative contributions have been the pride and pillars of Telugu cinema. Disrespecting them is degrading ourselves,” he said.

Chaitanya’s brother Akhil Akkineni also shared the same message in his Twitter account, while their father and ANR’s son Nagarjuna hasn’t reacted to the incident yet.