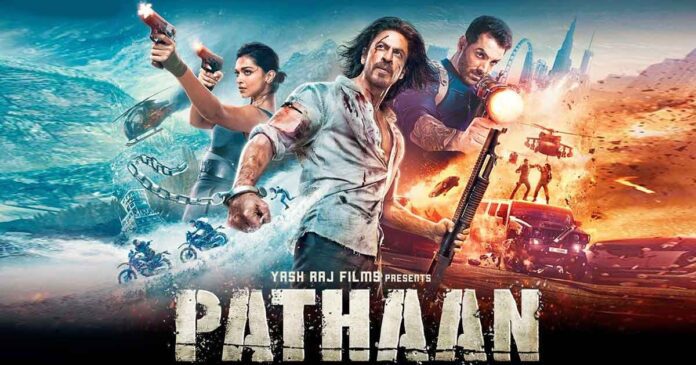 Shahrukh Khans’s Pathaan released today amid a massive craze around it. Despite weekday release, Pathaan has recorded terrific Advance bookings and the openings are on a super firm note in each and every territory in India.

Now the movie opened with extremely positive reviews from the Bollywood critics and also the Audience WOM is superb for the film. The film is all set to create a new opening day record in Bollywood films .

The trade circles are telling that even the film has chances for 100 Crores opening day worldwide. The film brings back the King khan Shahrukh Khan at the box office. It also broke the KGF 2 advance bookings and made it to the second position in the bookings.

To the unbeknownst, Bahubali 2 holds the record for pre-selling 6.50 lakh tickets on 3 chains on opening day, KGF 2 with 5.15 lakh tickets, then war with 4.10 lakh tickets.

Pathaan marks Shahrukh Khan’s return to the big screens after 4 years. He was last seen in a lead role in Anand L Rai’s Zero. This Siddharth Anand directed action-thriller is a part of Aditya Chopra’s ambitious spy universe and stars SRK, Deepika and John Abraham. The adrenaline-pumping ride has been released in theaters in Hindi, Tamil and Telugu.