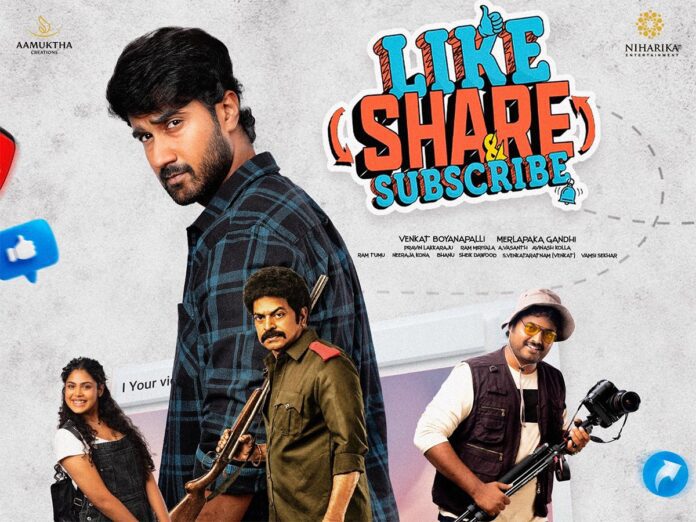 Santosh Shoban’s comedy entertainer Like Share and Subscribe hit the screens today. The film has been promoted in quite a unique manner and the makers have stated the film will be as quirky as the promotions. Merlapaka Gandhi known for hit comedy films like Venkatadri Express and Express Raja has teamed up with Santosh Shoban who impressed audience with Ek Mini Prem Katha. While other small budget comedy films are failing at Tollywood box-office, lets see if Like Share and Subscribe can impress the audience or not.

Story: Viplav (Santosh Shoban) is a travel vlogger who runs his YouTube channel. On one of his journeys he meets Vasudha (Faria Abdullah) who has similar interests. All is going well when the couple find themselves in the world of Naxalism. What happens when two travel vloggers come in touch with the Naxalites is what the plot follows.

Performances: Santosh Shoban is improving with every film. He has got great screen presence and is good in comedy scenes with Sudarshan who is another key element of the movie. Faria Abdullah continues her Jathiratnalu form and is good in her comic timing. Brahmaji is the pick of the lot and shoulders the film brilliantly. He has got a meaty role and brings out his experience and proves why he’s one of the most versatile actors in Tollywood. The first half which lays down the film’s premise showcased promise but is let down because of lack of enough comedy. Most of the jokes fall flat and you would find yourself wondering where the story is heading.

Analysis: Like Share and Subscribe is a film that has its heart in the right place. The film would have been quite enjoyable if the writing supported the uniqueness of the plot. Apart from jokes failing to impress, the film’s screenplay in the second half lags and tires you out. Overall, it is a comedy film where comedy lets it down.

Merlapaka Gandhi, who is known for his witty films with great situational comedy fails at delivering a film on par with his other hits. Like Share and Subscribe fails at logic test in many places. However, that is not the biggest problem here as some of the biggest comedy hits in Tollywood often lacked logic. The biggest problem is writing and not making viewers feel immersed in the story.