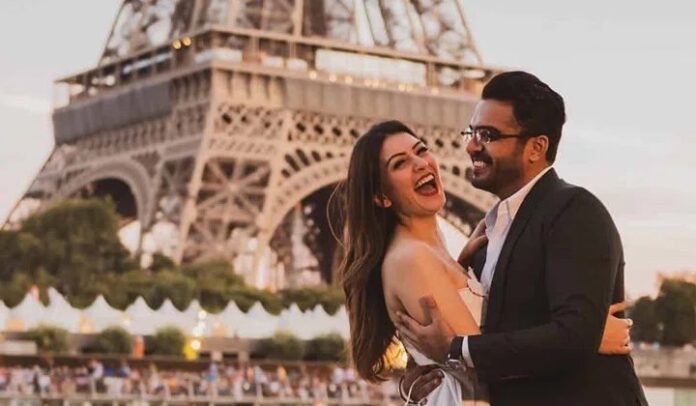 For some time now, the news that heroine Hansika Motwani got married has been doing the rounds on social media. Questions like who is the groom and is It An arranged marriage Or is it a love marriage and many doubts haunted everyone.

Recently putting a full stop to all this rumors, Hansika has revealed who is her future husband is on her social media account. She posted pics of her fiancee proposing love in front of the Eiffel Tower on Instagram. The Groom Sohal Katuria also replied to her post saying ‘I love you my life…not now but always’.

Hansika’s now fiancé Sohail Kathuria was first married to a girl named, Rinky. They had gotten married in 2016 at a destination wedding in Goa. A video highlight shows Hansika Motwani dancing at the sangeet ceremony of Sohail Kathuria’s first wedding. From attending the Roka ceremony to dancing her heart out at pool party and sangeet ceremony, Hansika was a part of all their wedding festivities.

The photos of Hansika getting engaged to businessman Sohail Kathuria are going viral. It is said that the couple had known each other for the past four to five years and Hansika also has shares in Sohail’s company.

Their wedding ceremony will begin on December 2 at Jaipur’s Mundota Palace in the state of Rajasthan. Their marriage will be held on December 4 in the presence of family members, politicians and film celebrities. And it remains to be seen if Hansika’s ex-boyfriend Simbu will also attend this ceremony.

Hansika has done movies with heroes like Allu Arjun, NTR, Ravi Teja and Nitin in Tollywood. Youngsters were fascinated by Hansika’s chubby glamour. In Tamil Nadu, fans even built a temple for Hansika. Hansika has gained recognition with her glamor and cute performance.

Hansika is currently doing a few of films in Tamil. She last acted in the Telugu film Tenali Ramakrishna LLB with Sandeep Kishan.

The news went viral on social media saying that Hansika will stay away from films after the wedding. She has already acted in 50 films and it is being said that she will stay away from the industry after her marriage and start looking after business.