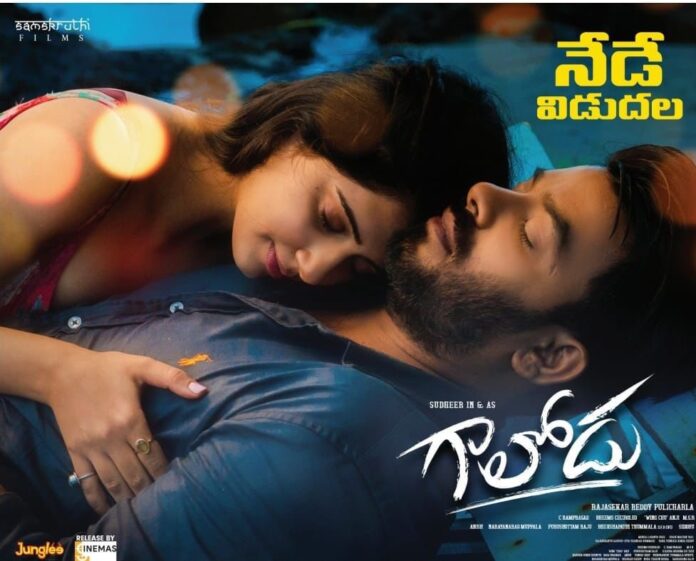 Sudheer, who has earned good fame on small screen is back with another attempt at shining on 70 MM. His previous movies like Software Sudheer, and Wanted Pandugod failed to deliver him success and now all hopes lie on Gaalodu with which he is planning of grabbing a major hit.

Story: Gaalodu is the story of a reckless youth Sudheer who wanders aimlessly in his village. He flees his village after a scuffle with a local leader’s son and lands in Hyderabad. Here he chances upon Shukla (Gehna Sippy) who appoints him as a driver. The two fall in love and what happens next and how Sudheer escapes his past is what the movie is about

Performances: Gaalodu is made to showcase Sudheer’s prowess as a mass hero. He has fights, dances and some emotional moments as well but most of it looks quite superficial and doesn’t look natural. Gehna Sippy has limited scope for performance and apart from being Sudheer’s love interest, she doesn’t have much to do.Saptagiri and Shakalaka Shankar have some scenes where they succeed in evoking some laughs but that’s about it.

Analysis: Gaalodu is a routine commercial flick with an age-old presentation. Tollywood cliches like a reckless hero, rich heroine and heroine’s father not accepting hero are all there in the movie which makes the movie feel outdated. The lack of freshness is one of the biggest drawbacks of the film. The run-of-the-mill story with bare minimum performances are the biggest drawback of this film.

Gaalodu is another poor attempt by Sudheer to project himself as a lead hero which unfortunately didn’t materialize. The movie transports you into past and will remind you of many early 2000s movies with similar tropes and sub-plots. The lack of freshness and poor execution let Gaalodu and the audience down big time.