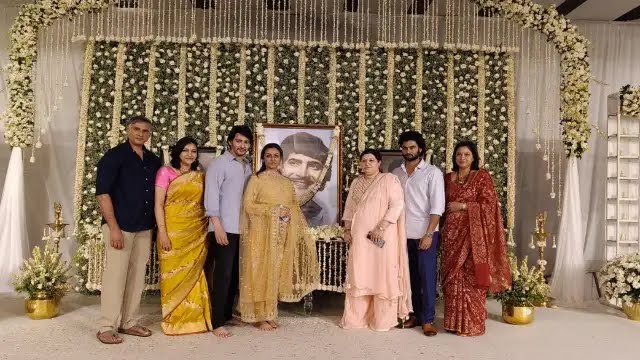 Superstar Mahesh Babu recently had to bid goodbye to his father and veteran actor Krishna on 15th November this year. Marking the 11th day of his demise, the Spyder actor, his better half, Namrata Shirodkar, his kids, and the rest of the Ghattamaneni family were seen attending the Pedda Karma Ceremony today on 27th November. Some pictures of the ceremony have also surfaced on social media.

Mahesh Babu has spoken in an emotional tone addressing the fans of his father Lt. Superstar Krishna on the eve of 13th day ceremony. It is known as legendary actor Krishna is no more and in his remembrance a function has been organized where fans were also invited in a convention center in Hyderabad.

Addressing the fans, Mahesh Babu has expressed his love and gratitude to his father. He said that out of all things his father had given, the innumerable fans were the most precious among all.

Krishna garu will stay forever with us, in our memories, Mahesh added. It is unusual that Mahesh becomes emotional on stage, but times have been challenging for him in that he had seen three deaths in close family in a single year.

We can hear the genuine gratitude in Mahesh’s voice. The way he treated fans in this event shows that he treats them like part of the family. There have been a strong fan base for Ghattamaneni family since 80s.