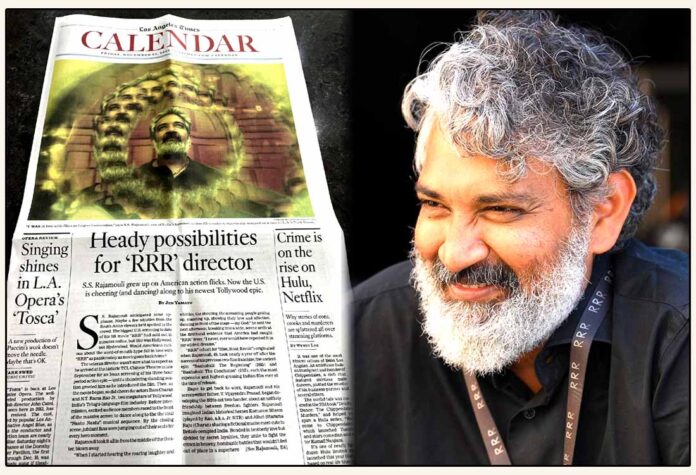 SS Rajamouli’s Action Epic RRR has become a film in regular discussions ever since its release earlier this year. The man behind the action wonder, SS Rajamouli stands at the center stage of all the attention the film is grabbing from all corners of the world. Rajamouli’s popularity has transcended boundaries and hit the Hollywood too.

It started with film journalists of Hollywood then the audience to the renowned and top directors, and finally, it reached a stage to become a contender for Oscars. This NTR and Ram Charan starrer is all set to get the unimaginable feat at the world’s biggest movie event.

Though SS Rajamouli’s RRR became a sensational blockbuster around the globe, it was not selected as India’s official entry to the Oscars, much to the dismay of the movie’s team and the Telugu audience.

However, Rajamouli kept the hopes alive by submitting the film for Oscar Committee’s consideration in multiple categories. He started campaigning for RRR to Oscars. As part of Oscar promotion, he attended an IMAX screening of RRR at famous TCL Theaters and got a thunderous reception from the US audience.

Ever since the RRR’s race to Oscars has gain momentum. One of the widely circulated daily of the USA, Los Angeles Times has published a front page article about SS Rajamouli and this shows how far Rajamouli has gone with his sheer talent and dedication.

The article in Los Angeles Times stated about the US audience got RRR fever and embraced SS Rajamouli when he visited the screenings there. It also discussed the possibilities of SS Rajamouli making big in Hollywood. This is indeed a proud moment for every Indian, especially for the Telugu Cinema audience.

The talent agency Creative Artists Agency (CAA) organized a screening of RRR on November 20, in Los Angeles. SS Rajamouli also attended the screening. The agency has close ties with many Hollywood studios and influential celebrities. CAA definitely boost RRR’s chances of getting the Oscars. It seems like they have started their campaign.

Let us wish all the hard work of RRR team pays off and RRR wins the mighty Oscars and the glory.